Sorry for the late post. This is Jason Jones playing the next to last night at Latitude 18. It's really close to Vessup Beach so we will call it a Beach Pic for our purposes.
Support your local juke joint.
Jay 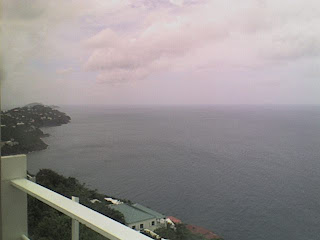 Finally, the webcam is working again! Click Here  but the weather station is still not reporting. We need to figure out why. We got our power back Monday afternoon with limited internet, real slow connection. We've reset everything but still no data. The homeowner said that sometimes it takes a bit for the IP addresss to reconnect to the site, but since it's now Wed and still nothing, there may be something else going on. The station  is solar powered and supposed to continue to record the data, then once it reconnects to the site, it will  update. I'm curious to see what our wind max was during TS Irene so hopefully we'll have an update soon. I'm sure weather underground would appreciate it also. 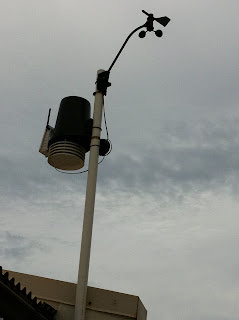 Well, we survived the storm, still no power since noon yesterday, leaky windows, some down trees here and there and a broken tile on our patio table, but other than that all is well. The harbor is brown and has some wave action, and Frenchtown is a mess. Our boat survived but got rocked around a lot. The CYOA canopies did not survive.

Our Honda generator did a good job of keeping the fridge running and some lights and a fan and the weather station. We were seeing winds in the mid 40's with gusts to 59 mph. Jay tried to hook the gen up to the water pump this morning so we could have a shower but I guess it just didn't have enough juice to do that. Of course the pump is three stories down so it could be just the draw on the extension cord. If it's still off when we get home this evening, he's going to try carrying it down to the pump and try it again.

We had to head into work today regular time since it was the first day of classes at UVI, gov offices didn't open until 10:00, Jay had to be at CYOA to clean up the mess. There was a curfew put in place yesterday evening from 8:00 pm until 6:00 am this morning. We had AT&T service pretty much thru the whole thing. But I lost service when I got to UVI this morning and haven't had any all day. Not sure what's going on with that.

The big question is where is now Hurricane Irene headed next? 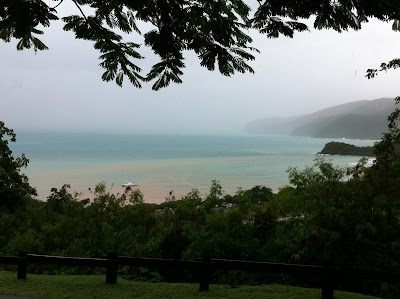 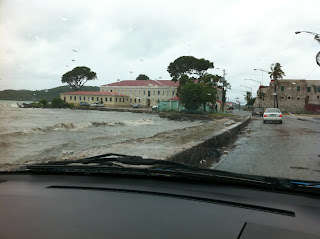 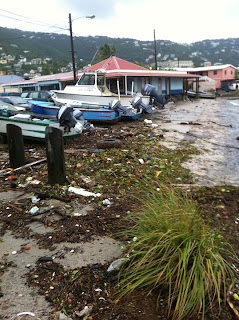 We're feeling the effects of the outer bands of Tropical Storm Irene. Today was the annual Texas Chili cookoff and it was a great turnout despite the weather. But they had to finally shut things down around 2:30 since the wind started kicking up. We checked our weather station and it said 21 mph winds with 28 mph gusts but hadn't updated since noon, which meant no WAPA. Once we got home Jay fired up the Honda generator and got the station up and running. It's currently reading 35 mph with 49 mph gusts and we're not in the thick of it yet. It's supposed to be 70 miles due south around 10pm so we'll see if it gets any worse. The shutters are up, except half the livingroom so we have some air flow and the boat is secured to the dock so we should be good to go. We'll post more if anything changes. TGIF! spent the last two days on St. Croix helping out with freshman orientation. It was a good trip. We got lots done and I got to wake up to this view! Can't beat that.

Hope everyone has a great weekend. :-)

Jost on a Sunday

We took a little boat ride over to Jost Van Dyke yesterday on a friends boat, since our's is still out of order. Very fun day. White Bay was a litte crowded but still loving going over there :-)

Kimber getting a bath for a good cause. Kimber getting a bath for a good cause., originally uploaded by captainjay.

The humane society is having a fund raiser at the dog house bar in Havensight. $25 for a nail clip shampoo and massage. Dogs only. Not a whole lot going on this weekend other than jay working on the boat and maybe a sail with some friends on Sunday. The parts we need for the motor are on national back order. Kinda indicates that everyone with this motor is having the same issue. But there are plenty of other things that need fixed in the meantime. Since the boat is on the dock it makes working a little easier so might as well take advantage of it.

It's been pretty hazy here since TS Email sailed by. Mostly Sahara Dust. But it's starting to move out and clear up the horizon a little. But this time of year we actually want it to be hazy because it helps to keep storms away. Speaking of storms, there are several disturbances out east that are slowly moving west so we're keeping an eye on them. Some tracks have them going north and others have them going south. It's just too early to tell. We'll know more by the beginning of next week.

But until then, we'll enjoy the weekend! :-)
Oh BTW, I've been going to a new exercise class (still going to Zumba also) called WillPower & Grace. It's really awesome. A mix between yoga and pilates with cardio, it makes you sweat like crazy. You do it barefoot and do warm up exercises for your feet, it's pretty cool. Check it out! http://www.willpowermethod.com/willpower-grace/
Posted by Deb and Jay at 9:07 AM No comments:

VITEMA to Conduct Operational Test of Tsunami Sirens on Thursday

The information is forwarded from the Virgin Islands Territorial Emergency Management Agency – VITEMA.

Between 10 and 10:30 a.m. on Thursday, August 11, the Virgin Islands Territorial Emergency Management Agency (VITEMA), and its contractor American Signal Corp., will conduct an operational test of the first phase of the Tsunami Siren Warning System.


Between May and June of this year, VITEMA installed 10 sirens at various locations across the Territory – four each on St. Croix and St. Thomas and two on St. John. On St. Croix, sirens have been placed at the D.C. Canegata Ball Park, the Christiansted Parking Lot, on Emancipation Drive and near the Legislative Building in Frederiksted. On St. Thomas, sirens are located at the Cyril E. King Airport, Griffith Park, Yacht Haven Sugar Mill, and at the Red Hook Marina. On St. John, sirens are located at Cruz Bay next to the Legislative building and at Fire House in Coral Bay.

Those within 1,000 feet or more of the sirens will hear warning tones and/or voice messages for hazards that can impact the Virgin Islands. The operational test is expected to last 15 to 20 minutes and VITEMA is making every attempt to inform businesses, neighborhoods and marine communities in the general vicinity of the sirens.

“This is the first of our routine operational test being conducted as part of our maintenance of this modern warning system,” VITEMA Director Elton Lewis said. “We want to ensure that our triggering mechanisms are functioning and the sirens will sound once activated.”

The operational test is not a drill and the public is not required to take any responsive action. If a major incident were to occur during the operational test, VITEMA would immediately cease testing of the system.

However, VITEMA is asking for feedback from those who heard the sirens. Tell us what you heard and where you were when you heard it. Take VITEMA’s online survey at www.VITEMA.gov, post it on our Facebook page, Tweet us at @readyusvi or call our office at 773-2244 on St. Croix, 776-6444 on St. John and 774-2244 on St. Thomas.

Visit www.VITEMA.gov to view the siren locations and for more information about Tsunami Siren Warning System.
Posted by Deb and Jay at 1:54 PM 2 comments: TGIF! what a week! Lots of anxiety this week when TS Emily was heading our way but thank goodness she stayed south and didn't give us any problems. It did give everyone a wake up call to get their hurricane list updated and stock replenished. Several friends who live on their boats all took off to vieques to hang out in the mangroves for protection. They ended up getting more of the storm then we did but still not bad. They considered it a good practice run to get everything ready to go.

So life is getting back to normal. Jay is off this weekend and we'll be working on the broken boat. Like I said, back to normal lol

Have a great weekend :-) What a difference a few minutes make. The storm clouds moved in and it looks like we're about to get some major rain. We just ordered dinner at Island Beachcomber so hopefully it holds off for a little bit. Decided to stop by the Island Beachcomber to check out the wave action and it's pretty impressive. TS Emily is giving us some wind and seas but that's about it. They are calling for more rain and wind tonight so we will probably pull in the patio chairs but that's about it.

Looks like we were spared the brunt of Emily. Here is the latest from VITEMA:

...This is an ACTUAL SPECIAL WEATHER STATEMENT ALERT...

The Virgin Islands remains under Tropical Storm Watch through 9:30 a.m. Wednesday as Tropical Storm Emily continues to move across the area. Emily is expected to pass south of the St. Croix at about 11 a.m. today, however, the latest forecast do not indicate that the Territory will receive significant rainfall with this system.

The opening of shelters on St. Croix, St. Thomas and St. John has been suspended.

A Tropical Storm Warning has been issued for the coastal waters surrounding the Virgin Islands with tropical storm conditions and remains in effect through Wednesday morning. Storm surge may raise water levels by one to two feet above normal tide levels and near the coast the surge will be accompanies by large and dangerous waves, according to the National Weather Service.

At 8 a.m. today, the center of Tropical Storm Emily was located near latitude 15.3 North, longitude 63.7 West. Emily is about 160 miles south southeast of St. Croix and is moving toward the west at 14 miles per hour and packing maximum sustained winds of 40 miles per hour with higher gusts. Tropical storm force winds extend outward up to 70 miles mainly to the north of the center.

According to the National Weather Service, the latest projected path of the storm indicates the core of the heaviest rains will remain over water and currently, there is little chance for hurricane conditions. Tropical Storm Emily is expected to turn toward the west-northwest and gradually decrease in forward speed during the next 48 hours.

VITEMA joins the National Weather Service in urging mariners to return to port, seek safe harbor, and secure their craft and to initiate preparations according to your emergency plan for tropical systems.

Along with the mariners, residents should also continue to monitor this storm system for any change while a storm Watch remains in effect. Stay tuned to radio and TV, and monitor NOAA weather radios and VI Alert for updated information on watches or warnings for this area.
Posted by Deb and Jay at 10:11 AM No comments: